For over a week now, one corner of YouTube frequented by Kazakh dissidents and close observers of human rights in Xinjiang has been only intermittently available.

On June 15, the YouTube channel of “Atajurt Kazakh Human Rights” went dark, its feed of videos replaced by a vague statement that the channel had been “terminated for violating YouTube’s community guidelines.” A few days later, the channel was reinstated without public explanation. Then, several days after that, 12 of the channel’s earliest videos disappeared from its public feed.

Atajurt collects and publishes video testimonies from family members of people imprisoned in China’s internment camps in Xinjiang. To ensure the credibility of these video statements, each public testimony shows proof of identity for the person testifying and their detained relatives. It also underscores the organization’s integrity, says Serikzhan Bilash, a prominent Kazakh activist and the owner of the channel.

Atajurt has collected thousands of video testimonies from family members of Turkic Muslims who have disappeared in Xinjiang. Witnesses show their identification to prove they are real people.

Accuracy is especially important not just because there is a lack of information coming out of Xinjiang, but also because testimonies often face criticism from supporters of the Chinese Communist Party—who, Bilash says, are looking for any excuse to deny what the United Nations has called “grave human rights abuses” in the province.

After being published by Atajurt, the information in the videos is then used by other organizations such as Human Rights Watch and Xinjiang Victims Database, which documents where detentions are occurring, the communities that are most affected, and the individuals that have disappeared. One representative of Xinjiang Victims Database told MIT Technology Review that their project linked to the Atajurt videos “thousands of times.”

For years, these videos—which date back as far as 2018—have not been a problem, at least not from YouTube’s perspective. That changed last week.

“We have strict policies that prohibit harassment on YouTube, including doxing,” a YouTube representative told MIT Technology Review on Friday, later adding, “We welcome responsible efforts to document important human rights cases around the world. We also have policies that do not allow channels to publish Personally Identifiable Information in order to prevent harassment.” 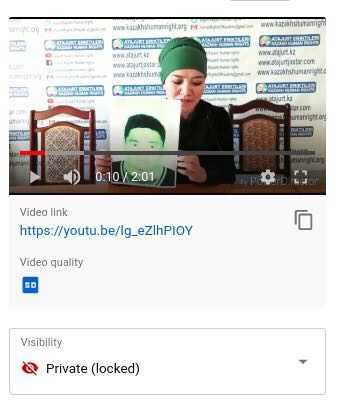 They were likely referring to Atajurt’s display of identity documents, which it uses to confirm the veracity of people’s testimonies.

Nevertheless, shortly after MIT Technology Review sent YouTube a list of questions about the June 15 takedown, and its content moderation policies more broadly, YouTube reversed its position. “After thorough review of the context of the video,” it reinstated the channel, “with a warning,” a company representative wrote in an email. “We… are working closely with this organization so that they can remove Personally Identifiable Information from their videos to reinstate them.”

“We by no means created a supervirus.” Ralph Baric explains gain-of-function analysis.

Joe Biden has a possibility to enhance the best way we...

Persistent Ache May Have a Distinctive Genetic Foundation in Ladies

Mike Cagney assessments the boundaries of the banking system for himself...

Uber's Autocab acquisition is being watched by UK competitors watchdogs

It might not really feel prefer it, however the selection works

This Week in Apps: App Retailer payments will get ghosted, Dispo...